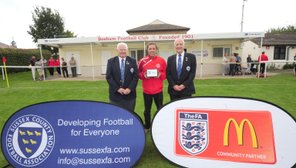 Bosham Football Club has formally been presented with their FA Charter Standard award, having achieved the status at the end of last season.

The FA-backed programme is a kitemark, which recognises and rewards high quality levels of provision in club and league football.

The award acknowledges clubs and leagues that are well run and sustainable; provide quality coaching and in a safe environment.

Club Commercial Manager, Simon Jasinski, said: "Over the last year, we have proactively sought new, and exciting initiatives in which to take the club forward - of which the FA Charter Standard formed a very important part.

"Gaining this status not only formally recognises the hard work both the committee and management put in at the club, but will hopefully act as a catalyst to encourage people to get involved in the future to make us stronger long-term - whether it being volunteers, players and coaches, parents, supporters or local businesses."

Meanwhile, Bosham also received additional financial support from the Football Foundation's 'Grow the Game' grant, to enable the Robins to increase participation amongst local youth players at under 16 level for 2014/15.

The FA Charter Standard kitemark was launched in 2001 and now has 6,800 clubs, with 653 advanced level Community Clubs and 300 leagues. As part of the award, Bosham also received a set of Nike match balls and certificate.