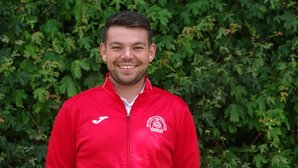 Saturday the 15th starts with our U15's playing in their second pre-season friendly after an encouraging performance against Southbourne ending in a 1-1 draw two weeks ago. New signing Lewis got off to a flyer with a delightful finish to level the score in the scond-half. Today they take on Emsworth U15's at a neutral venue in Chichester. 10:00 Kick Off.

Fleetlands play in the top tier of the Hampshire leagues (Premier) so it will be a tough test for Tony's teams.

It has been an encouraging pre-season so far with 4 friendlies played and a good depth of squad being developed.

First Team & Club Vice Captain Conor Crabb (pictured) has been buoyed by the new quality signings, many of whom have been introduced to the club by assistant manager, Jason Mines.