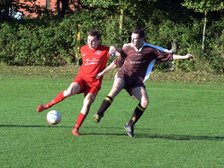 ‘Mistakes prove costly as Bosham feel the sting of the thorn again.’

Mistakes coupled with a sending off were the undoing of a Bosham side, which had been intent on finding a positive result, on their travels this week, but Copthorne had other ideas leaving the reds frustrated at coming away from another trip empty handed.
Bosham started strongly and in the second minute had themselves in front thanks to the excellent Alex Barnes. Barnes’s predatory instincts were clear for all to see when on hand to thump in a rebound after keeper, Jamie Caven, had saved well at the feet of the on rushing Josh Mines. Bosham needed to take the positives from this excellent beginning but the yellows, instead, slowly grew into the game and started to cause a few wobbles at the back for the Robins but the likes of Nick Edgington and Pat Bulbeck were a tower of strength for the reds to keep the hosts at bay.

Bosham did have some success, as the half wore on, with Ollie Hawkins showing good pace to create opportunities but his fellow players were wasteful in front of goal and, eventually, were made to pay for the waywardness when, not long after the half hour, Oscar Weddell, deservedly drew the yellows level. Copthorne surged forward, on the break and chance came the way of Ryan Fenton, to put a teasing cross into the Bosham penalty area. The ball evaded reds defenders who had also failed to check the late run from Weddell who slammed the ball home, at the back stick, to restore parity for the yellows.

Bosham did gain an, almost, instant response when, only a minute later, Hawkins, again, terrorised the Copthorne defence and produced a quality ball to far post where Nathaniel Monk was waiting to apply the coup-de-gras to restore Bosham’s lead at just the right time. The Robins held firm to go into the interval with the slender advantage, but knowing that an improved display would be needed in the second half if they were to come away with the spoils.

Indeed, Bosham’s chances were lifted just five minutes after the re-start when Harvey Weddell needlessly picked up a second yellow card and was sent off, leaving Bosham to play against a reduced Copthorne side for the remainder of the game. The half became scrappy as the yellows made every, sterling, effort, to keep the visitors at bay and, somewhat against the run of play found themselves level a short time later when Oscar Weddell was afforded to opportunity with a penalty for a trip in the box, Weddell confidently fired home to give the yellows renewed hope and shortly afterward the team numbers were level again when Bulbeck had a moment to forget in picking up a second yellow card and receiving his marching orders as well.

Bosham went into rearguard mode after that as the potential of the game slipping from their grasp became apparent and were dealt another blow when keeper, Jack Hickman, was forced off with a knee injury with Josh Mines going between the sticks to deputise for the remainder of the tie.

Sadly from him, and Bosham, Mines was shortly to pick the ball out from his own net when, with ten minutes to go, Bosham failed to snare a surging run from Miguel Figuerda-Donne who surged into the box and fired low past the despairing dive of Mines and put the hosts in front for the first time in the match.

Bosham threw everything bar the kitchen sink at Copthorne in the time remaining but couldn’t find the moment of magic to get back on terms and it was a joyous roar from the home players what met the final whistle and another frustrating outing for the reds. Next week Bosham entertain league leaders, T D Shipley at Walton Lane and will certainly need a top performance if they are to take the prize scalp of the early pace setters.

Following the final whistle at Copthorne, Bosham manager, Tony Hancock spoke to me with his thoughts on the game. He said: I’m gutted obviously as I feel it was definitely one that got away from us. Five minutes of madness in the second half, along with other mistakes ultimately proved our undoing today. We didn’t play badly by any stretch and deserved to come away with something at least for our efforts. Next week will be a tough challenge but, rest assured, we will be ready.’
Alan Price