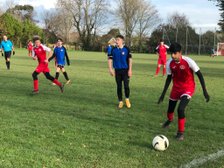 Bosham under 16s returned from the second lockdown with a thumping win against top of the table Felpham Colts. Bosham set the early tempo and were soon ahead when Jack Carter played a long ball over the top for Finley Roberts to run on to. Finley kept his composure to lob the advancing keeper to make it 1-0. Bosham were in total control and added a second when Toby Greatorex, who'd only just come on, expertly slipped the ball under the keeper. Two became three when Toby Greatorex crossed the ball from the left for Finley Roberts to head in at the far post. 3-0 at half time certainly didn't flatter Bosham who could have added to their goal tally.

It didn't take the Robins long to get back in their stride after the break. Finley Roberts completed his hat-trick with an assured finish after a great team build up starting from the back. Having made some superb saves, Rory Vinton-Peters was finally beaten when Bosham couldn't get the ball away from a rare Felpham attack. Finley Roberts then scored a fifth and a fourth for him when Toby Alfords tenacity won the ball on the touch line and crossed for Finley to score with his right foot. Finley then had a fifth ruled out when he was adjudged to have fouled the defender before firing in from a tight angle. Felpham scored a late consolation but it didn't take the gloss off a terrific performance by the whole team. From the goalkeeper to the back four, midfield and the strikers this was a game in which Bosham should take a lot of confidence from moving forward. Let's hope the season can continue.

The U15's continued their impressive form with a fourth consecutive victory against Whyke Utd.

Following a bright and inspirational performance from the U16s, the U15's were keen to follow suit, and that they did. Bossing proceedings from kick off, Bosham created some excellent chances through great build up play. However it took a 20 yard spectacular strike from Charlie Bennetts to penetrate the resilient Whyke defence. A second soon followed when Isaac Samedo was fouled in the box after a skilful run, Isaac then dispatched the resulting penalty, 2-0 to Bosham at the break.

Bosham dominated the second half but it wasn't until the 70th minute that they added to their tally, this time Tom Dean toe poking home from close range from a great freekick.

A special mention to the Bosham back line and goalkeeper Cameron Davey for another clean sheet.

A brilliant team performance and a well deserved win means there are only 3 points separating Bosham from third place.