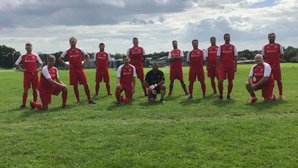 Bosham vets kicked off their second season in the Meon Valley Vets League on Sunday on a warm Sunday September afternoon.

With four new signing making their debuts and only one pre-season under their belt the Robins started well, going 1-0 up in the first five minutes.

Bosham looked the better side in the opening exchanges, with both team cancelling each other out in the final third.

Waterlooville were back in the game after equalising on 24 minutes when a shot from outside the box bobbled in from under the keeper.

Then 10 minutes later the home side got the upper hand when another strike from 30 yards bobbled in.

As the second went on Bosham started creating more chances with both Carson and Varndell getting forward from wider area.

Bosham were knocking on the door and a surging run from the skipper Blanchard resulted in the ball falling kindly to Reddingon who on his second attempt tucked the ball into the bottom corner for the equaliser.

In the last 10 minutes both teams went for the win and a deep cross saw Meads rise like a salmon at the back post and was inches from connecting.

A fair result in the end and a good point on the road. Next game home to Porchester Vets on September 20 - fixture to be played at Warblington School.

**Bosham Vets are looking for a kit sponsor for the 2020/2021 season. Please contact the club if you are interested in sponsoring the team.