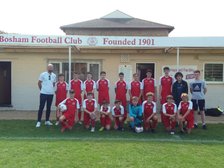 Finally, it is lift-off for Bosham U15's.
After some extremely encouraging performances from their first 5 league games, Bosham U15's finally got the result they deserved.

This victory sees Bosham climb off the bottom of the table, and with a home game against Ferring on Sunday 25th, another victory would see Bosham leapfrog them into 8th position.
Sunday's victory against Lancing was hugely encouraging with every one of the squad putting in an incredible shift. Goals in the first half from Theo and Charlie B were enough to seal the points.

The management and coaching team, consisting of Nick Edgington, Charlie Northwood, Kai Toogood and Harley Redman have all been encouraged by the players performances and development this season. With 20 players regularly attending training, it has been a tough job selecting the squad of 15/16 each week.